Stay tuned for upcoming events for Najwa Karam in near future.

Najwa Karam (نجوى كرم‎‎) is a Lebanese American singer producer songwriter and fashion icon. Known for her amazing voice and great beauty Najwa is the best-selling recording artist in the middle east, and also the highest paid what makes her the best female artist in the middle east and the richest. She has sold over 60 million records worldwide and has contributed to the spread of the Lebanese dialect in Arabic music. Apart from her singing career, Najwa is the main judge on the hit television show Arabs Got Talent. Karam has a street in her name “najwa karam street“ in Zahle lebanon. She has also been given the key of chicago so there is no doubt that najwa karam has the widest fan base in the middle east. Najwa's domination of the Arabic Music industry began in 1994, when she had major successes with albums such as Naghmet Hob, Ma Bassmahlak and Maghroumeh. In 1999, her album Rouh Rouhi, topped the charts throughout the Arab world, and in 2000, Najwa's album Oyoun Qalbi brought Najwa's greatest success yet, selling over 5 million albums worldwide and holding the albums to date. The success of Nedmaneh earned Najwa numerous awards, including a coveted Murex D'or award for Best Arabic Artist and additional awards from Najwa's record company, Rotana Records: Artist of the Year, Album of the Year, and Highest-Selling Album. By the time of the release of "Saharni" in 2003, Najwa had established the status of pop icon in the Middle East. Najwa's more recent albums, such as Shu Mghaiara, Hayda Haki, Am Bemzah Ma'ak, and Hal Leile...MaFi Noum, have all sold millions of copies and achieved great success, earning her numerous awards and recognitions worldwide. Her many singles, such as "Shou Jani" and "Lashhad Hobbak" have also topped music charts. Najwa has collaborated with musician and composer Melhem Barakat, as well as with Wadih el Safi on a single titled "W Kberna" ("We Grow Old Together"), which achieved major success throughout the Middle East. She is a sponsor and spokesperson for Pearl Properties, a UAE real-estate company, which features her in their advertisement commercials. In 2011, she collaborated with Sony Entertainment and Rotana to produce the first 3D music video for a Middle Eastern pop artist, accompanying her song "MaFi Noum". Najwa is one of Rotana's most-important record for best-selling Arabic-language album in history at the time. In 2001 Najwa's album Nedmaneh sold over 4 million copies worldwide. 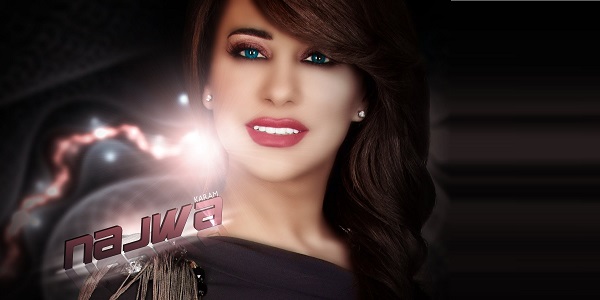